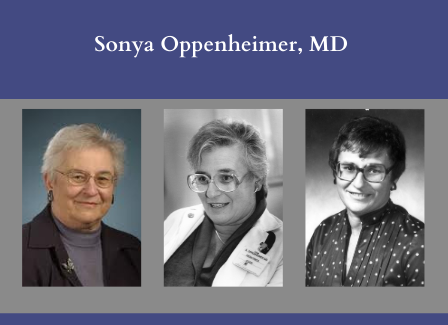 It is with a heavy heart we share that a Cincinnati Spina Bifida champion, Sonya Oppenheimer, MD, passed away on Friday, October 23rd after a fractured hip resulted in a hospital stay and subsequent hospice care. For many parents in Greater Cincinnati, “Dr. O”  as she was fondly known, was the first person to speak compassionately with them about their child’s diagnosis with intimate knowledge and optimism.  She didn’t so much sugar coat her delivery, but instead shared positive outcomes of people living with spina bifida which brought acceptance within reach.

In 1969, Dr. O was one of the first physicians to join the Division of Developmental and Behavioral Pediatrics at Cincinnati Children’s in a small residential building on Burnet Avenue. Soon after, she became director of the Spina Bifida program where she created the interdisciplinary clinic that still exists today. When Dr. Jack Rubinstein retired in 1997, she became the second director of the previously named Cincinnati Center for Developmental Disorders where she also led the UCCEDD and LEND programs.

In 2005, a Chair was established at Cincinnati Children’s for Dr. O a year after her own retirement, and in October of 2019, the Sonya G. Oppenheimer Division of Developmental and Behavioral Pediatrics was named in her honor. In the broader community, the Cincinnati Enquirer also recognized Dr. Oppenheimer on their prestigious Women of the Year list in 1981 as a regional leader.

All who worked alongside Dr. O considered her not just a colleague and mentor, but a dear friend. The children, parents, caregivers, and adults with spina bifida she served in clinic all feel the loss of this truly great woman. The words from her funeral prayer bring comfort to us now as her presence so often did in clinic, “So long as we live, she too shall live, for she is now a part of us, as we remember her”. Rest in Eternal Peace, Dr. O.

The family has asked that in lieu of cards or flowers that donations be made in her memory to Hospice of Cincinnati- East Location.