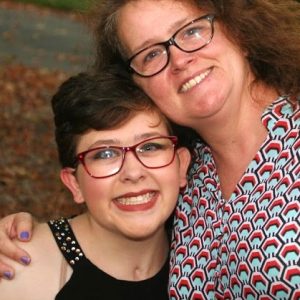 While the average teenager is preoccupied by dating, friendships, and life after high school, Amelia has just recovered from another surgery. At only 18 years old, she has conquered an astounding 81 surgeries, 41 of which have been on her brain. And yet sitting in front of her, what is most noticeable about Amelia is her sharp wit, her lively energy, and her contagious laugh.

Within 24 hours of being born, Amelia was fitted with the first of many shunts to combat her hydrocephalus. Needing 10 more spina bifida related surgeries by the age of 3, her family then moved from Washington to Ohio where she began being seen at Cincinnati Children’s Hospital Medical Center (CCHMC) and has since had a staggering 71 more surgeries. During their first visit to CCHMC, Amelia’s mom, Pam, was introduced to Diane Burns of the Spina Bifida Coalition of Cincinnati. Pam states this was a huge turning point for their family, as “it’s been great for Amelia to have some peers and to have people we can talk to.” 15 years later, Amelia has become someone other kids look up to. Recognizing that all surgeries can be anxiety inducing, whether you’ve had 1 or 81, Amelia offers the following tips for anyone going into surgery: “Always have a support person or a support stuffed animal or blanket with you. Also, have multiple forms of distraction available to you. You’re always going to be nervous. There’s no escaping it. But it helps.”

Through it all, she has also found personal ways to cope and prepare herself for hospital visits and surgeries. Using a tip from one of her previous therapists, Amelia created a variety of music playlists. Some help her to relax, while others get her energized. Journaling has also been a useful tool that has helped Amelia lay out her thoughts on what is about to happen and mentally prepare for it. However, her “head shaving parties” have been game changers. When an individual has a shunt adjustment, the surgeons have to shave many parts of their head in order to gain access to the entry sites. To add to the emotional and physical affliction associated with surgery, it can be especially jarring to wake up and not recognize yourself. In an effort to gain back some control over her body, Amelia decided something needed to change. Thus, “head shaving parties” were born. Now, before each shunt surgery, Amelia and her family do the prep work themselves, with even her stepfather and stepbrother taking a turn at the razor in solidarity. For Amelia, this has been not only an amazing show of support, but also a weight off her shoulders. 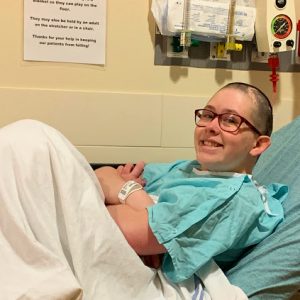 Over the years, Amelia’s family has learned how to recognize when it’s time for a visit to the hospital. For Amelia, signs of needing a shunt adjustment include cognitive delays such as a decline in memory and processing speed. She also experiences loss of coordination and emotional control. Always, there are unbearable headaches. Amelia’s doctors have come to depend on her family’s hunches that things are off, because often scans show normal functioning when it is anything but.

Dr. Karin Bierbrauer, neurosurgeon at the Center for Spina Bifida Care at CCHMC states “Patients who have had frequent shunt operations challenge us as pediatric neurosurgeons and neurosurgeons in general to continue to explore ways to leverage research, new technologies and innovations to not only reduce the need for shunt reoperations, improve the diagnosis of shunt failure, make it easier to access, update and transmit information about specific shunt implants for patients and families, but also reduce the need for spinal fluid shunts overall in patients with spina bifida. Patients who require frequent shunt reoperations in particular continue to inspire all of us to continue the search and journey towards bringing that future closer.”

Despite everything, Amelia continues to thrive, especially through her positivity. She reminds us, “If you don’t laugh through your hardships, you’re going to break down. It’s easier to laugh.” A recent graduate of high school, she now studies at the Project Life program through Butler Tech, where she focuses on learning life and job skills. There, she has made many friends and gained a wealth of knowledge. She plans to continue living with her family and six dogs while she navigates the beginning of adulthood and her transition from CCHMC. More surgeries are certainly on the horizon, but Pam doesn’t let that cloud the present. “Don’t worry what’s going to happen tomorrow or next year. Take every day and enjoy what you get. It’s easier some days than others, but we try.”