As we gradually become a more inclusive society, the concept of integrating people with disabilities into the world of sports is no longer foreign. Adaptive and inclusive sports have opened up opportunities for people with varying cognitive and physical abilities to experience the benefits of getting involved in an athletic activity. Differing a bit, adaptive sports involve some kind of modification to accommodate those with disabilities, such as wheelchair basketball or sled hockey, while inclusive sports allow people of all abilities to participate on a team without changing the way the game is played.

Sarah, a soccer coach, physical trainer, and mom of 3 boys, has been no stranger to physical activity both for herself and her family. However, when it came to getting her youngest son Thomas, age 5, involved in sports, Sarah had a bit of anxiety. Similar to other 5 year olds in many ways, Thomas enjoys Marvel games, Mario Kart, and his favorite part of school is recess. However, Thomas was born with spina bifida and his walker, leg braces, and speech delay initially made the thought of a team sport seem intimidating. Says Sarah, “My fear was that if we did this in a typical setting, he wouldn’t be able to communicate his needs well and would slow others down or take away from their experience.”

Still, Sarah has always seen the benefits of sports, including socialization, routine, and exercise, and she was determined to involve Thomas in whatever capacity he was able. She states, “I can see how there are so many other things you have to focus on when your child has special needs that some of these other things [sports and other activities] fall by the wayside. I wanted him to see how important movement is and all the benefits of it.” 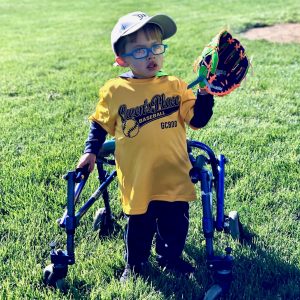 Through volunteering for Top Soccer, Sarah learned there was in fact, a place for Thomas in sports and he was able to join an adaptive soccer team. Using an enlarged soccer ball and organizing teams by age, this league provides a space for children of varying abilities to get out and play. Additionally, through connecting with other parents of children with disabilities at Top Soccer, Sarah quickly learned about inclusive baseball and kickball offered in their area.

In signing Thomas up for each of these three sports, Sarah realized that many of her fears were unfounded. Surrounded by a community of those seeking the same physical activities for their child, any feelings of doubt were quickly transformed into those of comfort and understanding. As for Thomas, he has faced a few expected challenges such as running bases, using his walker in the grass, and getting overheated, but he has integrated himself well, making new friends and gaining a sense of community. His confidence has spiked, partially due to finding this common ground amongst his brothers, who cheer him on and even participate in some of his games. Thomas’ family is also seeing the physical benefits from his involvement in sports. His overall strength has improved and he is less timid about engaging in rough housing with his brothers and training at a kid’s class at the gym where Sarah works. As for a downside, the family has yet to find one.

Emmy Kaiser, a two-time Paralympic wheelchair tennis player and professional athlete who travels the world to compete, is grateful for her lifelong participation in adapted and inclusive competitive sports. “Adapted sports has had a huge impact on my life starting from a very young age.” states Emmy. “I played lots of sports growing up and then chose to focus on tennis in high school. Since then, it has not only given me the opportunity to travel the world, but also influenced my education, pursuing a Masters in sport and exercise psychology and coaching education. I highly recommend playing sports no matter what your physical abilities are. If you are interested in a sport, go out and try it.”

Individually, as well as through the different teams and leagues, Sarah has come to learn there is very little a child with special needs can’t do and reminds us that it just takes a bit of planning to include them. Sarah recognizes the Spina Bifida Coalition of Cincinnati for helping her formulate this mindset before Thomas was even born. She says, “I think SBCC was a big part of what made me want to chase this stuff. They make it seem like there’s nothing someone with spina bifida can’t do and it planted that seed into our brains that he should be pushed to do things like any other kid.”

Looking to the future, Sarah hopes to find adaptive horseback riding and swim lessons for Thomas, while continuing with the other sports for as long as Thomas enjoys them. Beaming, Sarah says she can see the pride in Thomas and is comforted to know he’s finding his niche. No longer the one on the sidelines, it’s now Thomas’ time to shine.